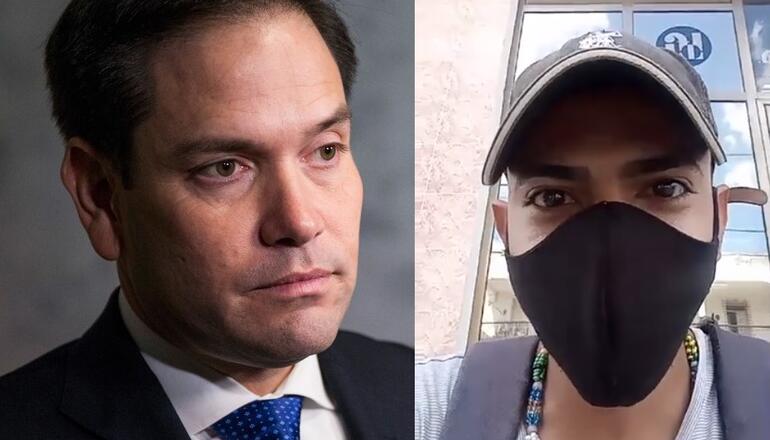 “It is not a secret to anyone that in Cuba you have to spend hours waiting in line to buy the food that is available on the island. Now, the criminal regime chooses to prevent citizens from recording them and posting the videos on social media,” Rubio said.

Police arrested Gongora on March 3 after his second broadcast on social media that day. In the first video, Gongora recorded the colas on camera, commenting about how Cubans had to endure such lines just to buy food. In the second video, he recorded a fight that broke out in La Época store, which operates in MLC (Freely Convertible Currency).

Gongora was released and fined with 3,000 Cuban pesos, he reported on social media several hours after his arrest. The 3,000 Cuban pesos amount is almost equal to Cuba’s monthly average salary, even after the regime recently raised income levels.

It is not uncommon for police to arrest citizen journalists and dissidents for documenting government dysfunction and operational failures while also charging artists for expressing themselves.

Civil society activists, independent journalists, and political artists are among those groups most targeted by Cuba’s repressive measures, the organization noted. According to reports, law enforcement officers who have some relationship with the non-official press, silence citizen journalists from reporting on the island’s prevailing shortages.

By March 1, 2021 CPD also documented that 11,000 civilians were facing ‘pre-criminal’ charges, a common typification in Cuba's Criminal Code. CPD reports that 8,400 of those Cubans have been convicted and 2,538 have remained languishing in prison for nearly a year awaiting sentencing.

“We reiterate that this measure of the Penal Code of 1979 is fascist, not socialist, since it has its origin in fascist laws, and used by dictators such as Hitler and Franco,” the organization said.

“Pre-criminal sentences for so-called “anti-socials” are inspired by those sentences present in Nazi Germany, paragraph 42 of the Criminal Code of the Third Reich of 1937, called offenders volksschädling (in English, antisocial), a categorization that included, among others, prostitutes, homosexuals, beggars, the mentally ill, joke tellers and critics of the Nazis, but especially those they called “lazy.”

In some instances, Cuban law replicates phrases and sentences from several Spanish laws, such as the “law of vagrants and thugs” and ‘La Gandula.’ The latter was a law approved by the Courts of the Second Republic on the Spanish Criminal Order of August 4, 1933, signed by Manuel Azaña as President of the Council of Ministers.

From 1954 to 1970, that law was enforced by Spanish dictator Francisco Franco who expanded the “law on dangerousness and social rehabilitation,” using the terms ‘social dangerousness,’ or ‘security measures,’ just as it is prescribed in Cuban law.

In March 2020 the CPD list had 127 political prisoners, and since then 53 new cases have been added for an average of 4.4 new cases per month.

The pre-criminal measures enforced upon the ‘socially dangerous,’ go as high as up to four years in prison, and applied through an article of the penal code that violates the most basic principles of justice adopted by the entire International Community and explicitly made in the Universal Declaration of Human Rights, CPD added.

Meanwhile, Freedom House’s Freedom in the World Report 2021 continues to list Cuba in the category of countries that are not free.

The human rights organization notes that in 2020 Cuban authorities “unleashed a wave of intimidation, arbitrary detentions and illegal house arrests against independent journalists, and a group of dissident artists with whom the government had at some point promised an open dialogue.”