After the Cuban government’s recent escalation of repression--including the forced disappearance of artist Luis Manuel Otero Alcántara--supporting artists have heralded a call to action to challenge the government’s new restrictions. 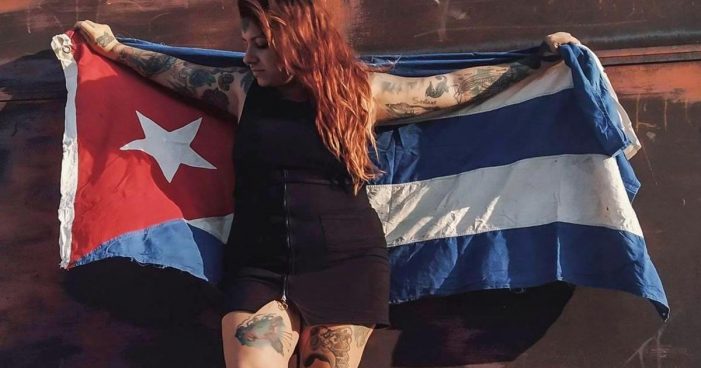 Cuban independent artists have launched a challenge #TheFlagBelongsToAll” (#LaBanderaEsDeTodos) to counter the government’s latest form of censorship, which prohibits Cubans from wearing the national flag as a sign of political protest. After the Cuban government’s recent escalation of repression--including the forced disappearance of artist Luis Manuel Otero Alcántara--supporting artists of the San Isidro Movement have heralded a call to action to challenge the government’s new restrictions relating to the use of national symbols.

Prominent Cuban activists are already facing prosecution under a  new law, which has not even officially gone into effect. In Cuba, even after laws are passed by the national legislature, they are technically not enforceable until the public is put on notice in the Official Gazette for the Republic of Cuba. Although the law at issue has not yet been published, Cuban police have been unlawfully enforcing the law, making illegal arrests.

Cuban artist Luis Manuel Otero Alcantara was arrested August 10 in Havana and has remained in detention for more than 48 hours. The reported cause of Otero’s arrest was his decision to carry a Cuban flag on his shoulders in public as part of a performance entitled "Drapeau."

"The national symbols belong to the body of the nation. They cannot and will not be able to ration them according to selfish interests of indoctrinating and monopolizing the thinking of Cubans," the San Isidro Movement explained in a statement.

The new law was passed earlier this year purportedly to "protect national symbols", including new regulations including the use of the Cuban flag. Cuban citizens can still carry Cuban flags at public events and hang them in their homes.

It is a quintessential example of the government’s draconian approach to restricting citizens to voice their opinions through ‘expressive conduct.’

To contrast the distinctions between so-called civil liberties in Cuba and actual freedom in the United States, the Castro regime is prohibiting Cuban citizens from honoring its flag by wearing it whereas the U.S. safeguards the rights of Americans to destroy their flag as a sign of protest.

In 1989, the US Supreme Court ruled that burning the American flag was a protected form of free speech under the Constitution’s First Amendment.

The Court reaffirmed its ruling in 1990, in US v. Eichman after political artist and then Communist activist Shawn Eichman burned the American flag on the steps of the US Capitol in Washington, D.C.

In both cases, the U.S. Supreme Court decided that although burning the American flag offended some people, outlawing flag burning would violate the spirit of the freedom the flag stands for.

The Court also ruled that the simple physical destruction of a flag itself does not diminish or weaken the symbolic spirit for which the flag stands.

"What needs to be urgently analyzed today in national life is the alleged right of the Cuban government and the security organs to discriminate against the use of national symbols, born and forged long before their reactionary revolution, their totalitarian communist party, and the birth of their aged leaders,” said Michel Matos, producer and member of the San Isidro Movement.

With this, citizens would not be allowed to combine the use of the Cuban flag with a foreign flag; fold it in a way that prevents it from opening, use it in commercial advertising, show it torn or broken, add stamps, writings or signatures to the flag, or incorporate it into larger works. In addition, if the flag appears on clothing, it must be displayed on the front and cannot be part of pants, skirts, scarves, swimsuits or underwear.

For the Cuban government, there is a close link between symbols and ideology, so they control their use in public spaces.

"The government says that everything that is done indoors can be allowed, but not in public spaces," explains Otero Alcantara, who believes that Cuba is approaching a critical time in which artists take possession of the symbols and expand even more criticism within permissible spaces.

In response to these repressive events, the San Isidro Movement has asked supporters to create photos and videos with the Cuban flag on their shoulders and publish them on the Internet with the hashtag #LaBanderaEsDeTodos. (The flag belongs to all)

The Movement also asks that Cuban flags be donated to the Museum of Dissidence in Cuba for its peaceful demonstrations and works of art since the group's flags have been seized by the police, and the price of these on the island is inaccessible.

The flags can be delivered "between August, Monday 12 and Friday 16 on Damas 955 Street, in Old Havana (MAPI) between 2 PM and 6 PM. If you are located in Havana, but cannot deliver a flag personally write to the following email address: sanisidromovimiento@gmail.com and a team will be sent to collect the flag or a donation.